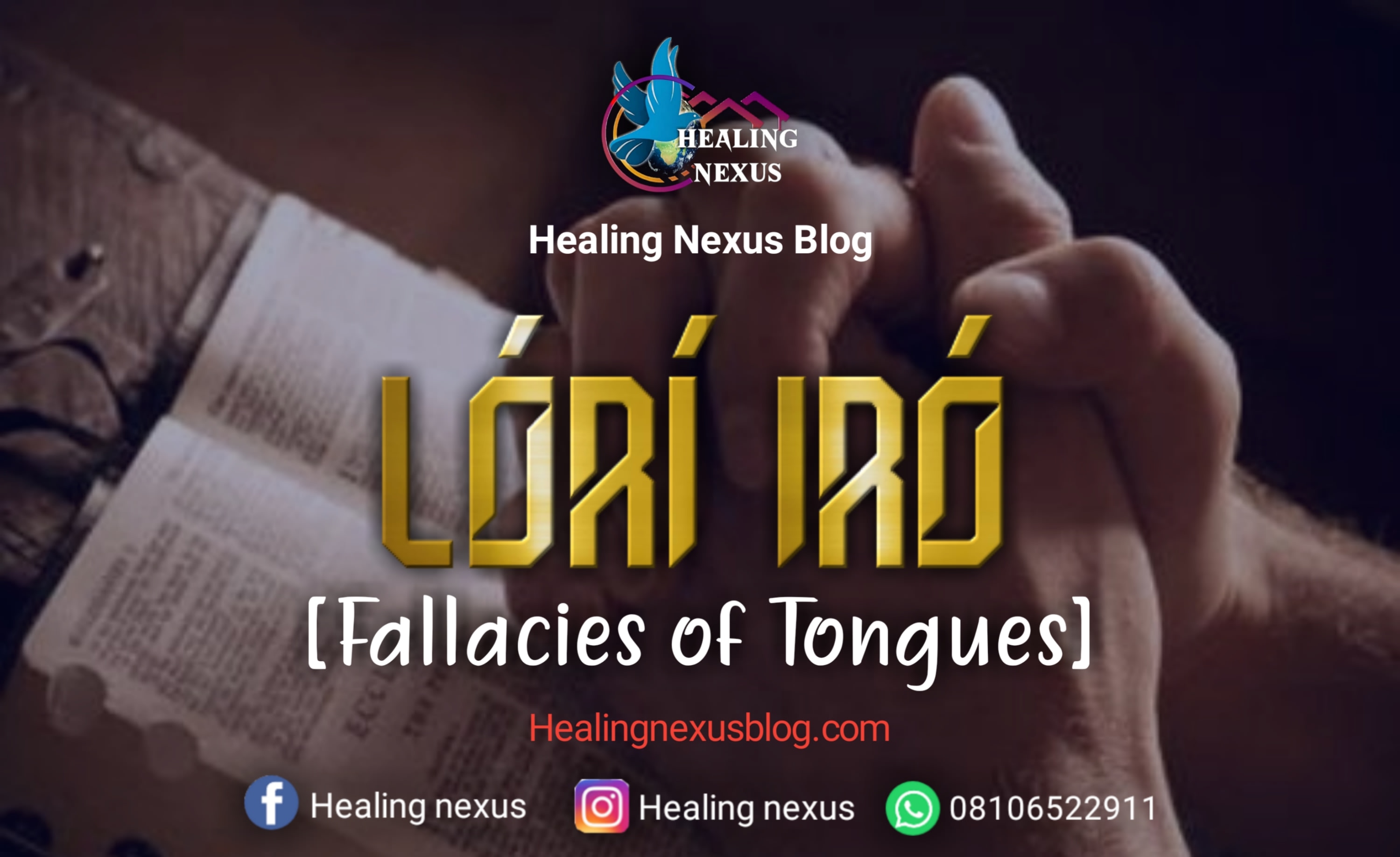 The word Lori iro is actually a Yoruba word that’s being used to counter those who are telling lies. And that’s why it’s being adopted into this series.

There are some lies in which people do tell when it comes to the concept of tongues. I’m just going to share five of those lies in this part of the series.

The fact that a motor car has an accident does not mean that we’ll be traveling on long distance by foot and stop boarding buses. Also, the fact that people misunderstand the concept of tongues and teaching many heresies about it does not mean we won’t teach it. The mandate God gave me is to divide the word of truth rightly and that’s the essence of this blog.

I’ve been accused of this many time in my home town. In fact, I’ve faced so many panels on this subject. Those panels claimed that “If you can’t speak in tongues, then you are not having the Holy Spirit”. I’ll just sigh and say within myself ” Lori iro” 😀. That’s a big lie from the pit of hell. Although, there are some people that do this campaign, but it’s a big lie, a very big extreme one for that matter.

The Apostle of Faith of the blessed memory Smith Wigglesworth, He was gifted in raising of the dead by faith. When he started his ministry, he had the Holy Spirit in him but was not baptized in the Holy Ghost. It was after he visited a ministerial friend that his friend’s wife baptized him in the Holy Ghost and he started experiencing the move of God in greater dimensions afterwards.

Tongues is just an initial evidence of Holy Ghost Baptism. It has nothing to do at all with the indwelling presence of the Holy Spirit. Once you give your life to Christ, you have the Holy Spirit dwelling in you. Tongues is just there to initiate you into a greater dimension of the experience you’ll have with Him.

I’ve heard so many folks too claiming that you have to be unconscious while receiving the baptism of Holy Spirit. They claim that the disciples were behaving as if they were drunk after receiving the Holy Ghost in the book of Acts. So, if you must receive Holy Spirit you have to be staggering and break some chairs before you can speak it out. Lol…… Lori iro😀.

This is a big lie. If the disciples were truly unconscious, why was it that Peter stood up to address the people watching them? The Holy Spirit doesn’t make one unconscious, the evil spirit does.

I was in a heavy atmosphere of the Holy Spirit, this girl was doing as if she was unconscious under the atmosphere. People were trying to hold her but she was not stable. As she performed her drama, she used her hand to break the pulpit🤣🤣🤣(You just finished laughing?). As i was in the Spirit too, I laughed but she was already crying and looking for means of saving her blood. “But,’ I thought to myself, ‘you said you were unconscious before”.

When you see such people at another time, please give them a slap even among the multitude, you’ll be surprised that they will come and accuse you afterward.

Laying of hands is actually a way of ministering Holy Ghost Baptism to an individual, you can check the book of Acts to confirm this. But it’s wrong if you think that it’s only the way to minister it. I’ve seen so many ministers that lay hands angrily all the time to minister Holy Ghost baptism to people, you’ll see these set of ministers pushing the person they are ministering to receive it by fire by force. It’s always funny when you are in a scenario where an angry minister encounters a stubborn client😀. It’s always a thug of war.

But we don’t need this. By the grace of God, I’ve ministered Holy Ghost Baptism to countless number of people on WhatsApp and they are now sporadic tongues speakers.

There is another fallacy by people who don’t believe in tongues. They would say that people are going to a school to learn tongues. Some will even say that the minister do tell them that this is what you should say as I’ll be praying for you.

Though, I’ve not seen a school where they teach tongues before. If you’ve see one before please let me know at the comment box. Neither have I seen a minister spelling tongues for people to say. Whichever way it may be, it’s very wrong. No matter who is involved in such act, it’s not right.

Tongues is a supernatural language that can be given to you by God alone, not man or any teacher.

Up next, we’ll be treating the steps to follow in receiving Holy Ghost Baptism.

Are you blessed by this? Drop a commendation note in the comment box

And if you have a question, you’re free to ask.

6 thoughts on “LORI IRO (The Fallacies of Tongues)”