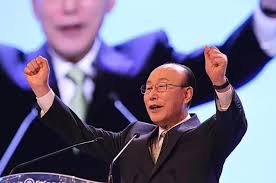 1. He was never a G.O of a denomination but served under the Assemblies of God Church

3. He preached his sermon with utmost simplicity than I have ever seen in anyone.

4. He introduced “cell system” as a strategy of church growth to the body of Christ.

5. He had an health issue which he developed as a young pastor because he wasn’t resting or delegating his works.

6. The illness caused him to faint severally. He almost fainted on his wedding day.

7. The illness and attempt to sack him by the Church council led him to the discovery of the cell system to achieve his dream church growth.

8. He grew from poverty to prosperity. He once faithed for a bicycle and office table.

9. He also taught prayer & relationship as a tool for church growth.

10. He taught himself English through the help of American soldiers and later learnt Japanese so that he can reach a larger audience.

12. He was an Apostle of Church Growth. Every person with large churches across the world today are his students.